Come Explore With Us.. 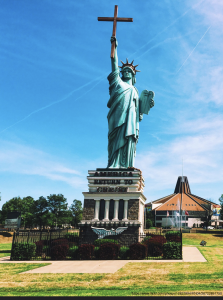 Did you know that the words Separation, Church, and State do not appear in the first amendment of our Constitution?  As the amendment relates to Church, the obvious intent of its authors was to prevent our Federal Government from exercising authority in matters of church and religion.

Many Christians would defend the supposed provision of the first amendment, as it relates to religion, though perhaps few actually understand it.  Questions like: “Would you like to see prayer back in the classroom?” and, “What if the teacher were Muslim and the prayers were offered to Allah?”  have many Christians arguing from both sides of the issue.  Actually, the first amendment was not intended to answer these questions.

To put things in perspective, it should be noted that we Christians, along with our founding fathers, believe that both Church and State are institutions ordained of God, and that both are necessary to fulfill His sovereign purpose.  The authority of State is ordained of God to, among other things, maintain law and order in a pluralistic society.  The Church exists as the institution through which Christians are to glorify God through evangelism, edification and worship.  God never intended for the two to become one.

Believers have an obligation to their government as citizens, and to the Church, as citizens of Heaven.  When we are faced with the dilemma of conflicting allegiance, our resolve must be to obey God rather than man.  Our motivation to abstain from crime and sin, is based first on our allegiance to Christ, rather than fear of punishment from the State.

As Christian citizens, we are obligated to be God’s representatives in our country and around the world, engaging in civil and social responsibilities.  Though Church and State are never to be one, Christians are commanded to be a vital part of both.  If believers refuse to be involved in government, all government would soon be ungodly, and the moral fabric of America would quickly start to unravel.  We will have only ourselves to blame