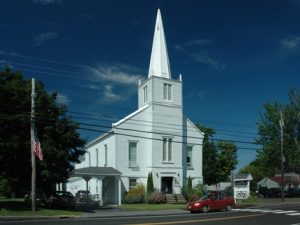 The Bible says, “For the love of money is the root of all evil: which while some coveted after, they have erred from the faith, and pierced themselves through with many sorrows. (1Timothy 6:10).”   Notice, it is not money, but “the love of money,” that is the root of all evil.  The issue is our attitude rather than our possessions.  The attitudes often associated with money are: selfishness, greed and covetousness.  We see them on display in the courtroom, at the gas pump, in the public meeting place, in the grocery store, and even in the church.  If you will be honest, perhaps your own memory can produce shameful examples of the love of money, or a desire for ill gotten gain, that ended in heartache.

God offers a simple solution to the multiplicity of problems caused by our infatuation with earthy stuff.  “But godliness with contentment is great gain.  For we brought nothing into this world, and it is certain we can carry nothing out.   And having food and raiment let us be therewith content.  (1Timothy 6:6-8).”  And then, “Let your conversation be without covetousness; and be content with such things as ye have: for he hath said, I will never leave thee, nor forsake thee. (Hebrews 13:5)”

Man is naturally selfish and greedy, and loves the things of this world, so, God’s prescribed remedy will necessarily be supernatural.  What could possibly affect the kind of change in attitude that is needed to clean up our families, businesses, government and churches?  Is there such a powerful remedy?  Really?

Yes, and the solution is found in a person!  His name is Jesus Christ!  He came to offer forgiveness and a new start to those who will put their trust in Him.  The Bible says, “If any man be in Christ, he is a new creature: old things are passed away; behold, all things are become new. (2Corinthians 5:17).”  Faith in the Lord, Jesus Christ, adds a new dimension to life, …a heavenly perspective that makes the things of earth grow strangely dim.

Those who truly know God have discovered His affection for them through Jesus Christ, His Son.  That the Bible is the Word of God is as obvious to them as it is for a bride to recognize the words of her beloved, in a letter.  Living in His love, and having a heart filled with His Word, makes it easy for God’s people to recognize that which pertains to Him, and that which does not.  They see His plan (as disclosed in His Word) unfolding before their eyes.  To them He is the Almighty, Unchanging, Ever Present God of the universe.  They understand that He is the owner and sustainer of all, and if He loosens His grip, the end would be instantaneous.

There are others, many of them, who might describe themselves as, “doing the God thing.”  They have discovered the social network that our world refers to as “christian,” and they like it.  They want to be the part of humanity that wears the white hats rather than the black (i.e. the “good guys” rather than “bad guys”). To these modern christians, God is something akin to a cosmic battery to be tapped into when life’s resources seem insufficient.  God, to them, can be conveniently blamed when things go wrong, but at the same time, He is the One they must turn to for hope when the issues of life need to be explained by something outside of themselves.  They have no concept of the God of the Word, though they humor themselves with an imagined God who is old, weak, naive, purposeless and powerless.  He is the God of this New Age, promoted today in churches around the globe;  …a God who exists only in the minds of ignorant men.

FACT:  There is only one God.  If you would read His Word (the Bible), you would find it more than an old, obsolete book.  If you would genuinely desire to know the truth, if you would pray that it might be revealed to you, and if you would commit to reading until you start to see the eternal light shine through, you will discover the Unchanging, Almighty, Eternal, Holy, Just, Loving, Merciful and ONLY God.

A boy left home one Saturday morning with these special instructions: “Son, we are having pictures taken at 11:30; don’t get dirty.”  The little guy peddled down the street intending only to say hello to a couple of friends.

It had rained the night before, so he rode slowly with effort to avoid any water that might be transferred to his clothing from the spinning tires.  He also avoided the street where the neighborhood “bully” lived, knowing that, given the opportunity, he would try to throw some vile substance on his clean clothes.  Several neighbor boys called out to him, but he would not dare join them now, he must return home clean.

At his first stop, he found the kids helping their mom decorate cupcakes.  At their invitation, he decided to stay long enough to produce one work of art himself, which he was allowed to take home.

During his second stop, since his friend wasn’t really doing anything, they just sat and talked while he stroked their family cat.

One last visit afforded him the opportunity to take a spin on his best friend’s new go-cart.  What a blast!  …but only in the grass mind you.

Upon his return home, he felt proud that he was 15 minutes early, but his countenance changed when he saw the look of horror on his mother’s face.  He was puzzled until she pointed out the chocolate on his neck and the collar of his white shirt, the cat hair that was so plentiful that she knew that the neighbor’s cat must now be bald, and then there was the grease splattered over his back, …the kind of grease one might put on the chain of a go-cart.

This little story serves as a parable of the Christian who lives in a world of spiritual corruption with a mandate to keep clean.  “Wherefore come out from among them, and be ye separate, saith the Lord, and touch not the unclean thing; and I will receive you, (2Corinthians 6:17).”  Consider how easily one might get dirty at a friend’s house.

The Apostle Paul asked the churches at Galatia in the middle of the first century, “Am I therefore become your enemy, because I tell you the truth? (Galatians 4:16)”  In my early years I never understood this question because in my world, with few exceptions, people appreciated the truth.  But times have changed and people have changed too.  For instance, there used to be a great difference between childhood and adulthood, but now many children just get older and older until they die of old age, having never grown up.  What seemed to be an almost universal appreciation for truth faded when the reins of the adult world were placed in the hands of those who have chosen perpetual childhood.

For these generations of willfully ignorant, there needs to be a revival of truth, a return to the old paradigm for life.  We need to get back to the basics, to review the facts.  We could start with, “In the beginning God created the heaven and the earth. (Genesis 1:1)”  Since He created it, it must be His, and He is the Lord of all that is His.  Common sense would dictate that we are accountable to Him.  Here’s another, “So God created man in his own image, in the image of God created he him; male and female created he them. (Ge 1:27)”  Another closely related, “Thou shalt not lie with mankind, as with womankind: it is abomination. (Leviticus 18:22)”  And how about this trove of eternal truth, “These six things doth the Lord hate: Yea, seven are an abomination unto him: A proud look, a lying tongue, And hands that shed innocent blood, An heart that deviseth wicked imaginations, Feet that be swift in running to mischief, A false witness that speaketh lies, And he that soweth discord among brethren. (Proverbs 6:16–19)”

What is truth?  What is right or wrong?  Who decides?  The One to whom we all belong, God.  Jesus said to His followers, “And ye shall know the truth, and the truth shall make you free. (Jn 8:32)” Now I ask you, “Am I therefore become your enemy, because I tell you the truth?