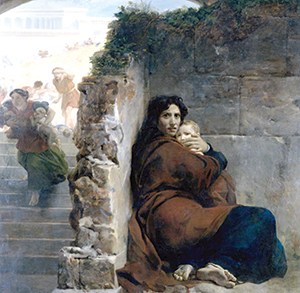 Contrary to the folklore version of the Christmas story there were no Wisemen from the Orient at the manger scene on the night that Jesus was born in Bethlehem; their visit was likely a year or more after Christ’s birth.  Actually, Jesus was a young child and was visited by the Magi in a house rather than a cattle stall (Matthew 2:11).  The star they had seen in their own land before the arduous journey, did not lead these Wisemen from their homeland to Israel, but reappeared after they had come to Jerusalem, and led them to Jesus in Bethlehem (Matthew 2:9).

King Herod who reigned in Jerusalem at the time, was troubled when he heard from the Wisemen that another king had been born.  To secure his dynasty he determined to kill the child king.  After a failed attempt to deceive the Wisemen into finding the king and returning to Jerusalem to report His whereabouts, Herod determined to kill all of the children of Bethlehem who were under two years of age.  Matthew 2:16-18 records the slaughter of the innocent children.  Before the soldiers arrived to carry out their evil deed, Joseph was warned by God in a dream, to flee to Egypt with his family until God would send notice that Herod was dead (Matthew 2;13).  Satan’s plot to destroy the Christ Child before His mission could be fulfilled, was thwarted.  But there would be other attempts on the life of the One who came to bring hope and joy to a world groping in spiritual darkness unawares.

This mission of God’s Anointed Son, Jesus Christ, was to live in a sin cursed world without sin.  His perfection qualified Him to be a satisfactory substitute to pay the price of my forgiveness and yours.  Jesus came to die because death is the penalty for sin.  He was crucified outside of Jerusalem thirty-three and a half years after His birth.  They buried Him in a borrowed tomb and in three days, as predicted, He rose from the dead and was seen of hundreds of witnesses before He ascended back to Heaven to make His promises good to those who will trust Him.   And yet, in sorrow He must still say, “And ye will not come to me, that ye might have life. (Jn 5:40)”